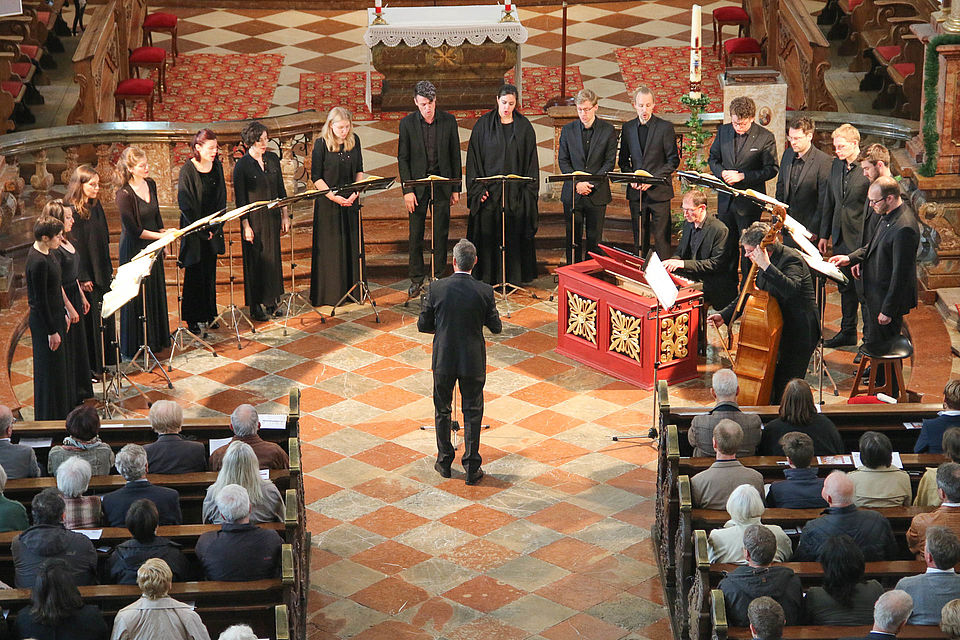 The vocal ensemble LauschWerk consists mainly of active and former members of the Audi Young Persons’ Choral Academy who have decided to pursue a professional singing career. Under the guidance of Martin Steidler, the ensemble of 8-16 singers develops challenging vocal music from the Renaissance to Modernity. The participants are additionally coached vocally and artistically by internationally renowned instructors, most recently by Julian Prégardien.

The aim of the academy is to prepare students for singing in professional ensembles, to develop the necessary vocal and artistic skills and to give impulses for further solistic development.
The Chigi Codex is one of the most important music manuscripts from the time of the Franco-Flemish vocal polyphony.

The music of the codex is very diverse. About half of it is a retrospective collection of sacral music by Johannes Ockeghem, master of the French royal band. This chapel was one of the leading musical institutions in Northern Europe in the 15thcentury. Another section of the codex presents masses related to the Burgundian-Habsburg in Brussels-Mechelen, from the early mass of the Busnois to the late masses of the 15thcentury. The last part of the manuscript contains a large number of motets beginning with Josquin’s “Stabat mater” and containing a ‘commemorative collection’ of five-part motets by Johannes Regis. A series of motets, mostly of French origin, were inserted after 1515 by a Spanish writer into empty folios throughout the manuscript.

The entire Chigi Codex is re-edited by Edward Houghton, Professor Emeritus of the University of California, Santa Cruz and is published by the University of Chicago Press. Through Kent Nagano and in close collaboration with Prof. Houghton, the first concert program with a selection of the Codex’s works was created. The vocal music is complemented by organ improvisations.