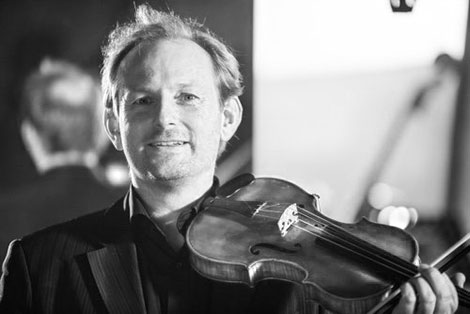 Since 2009 Rüdiger Lotter has been Artistic Director of the Hofkapelle München.

As one of the most interesting and versatile baroque violinists of his generation, he now also makes a name for himself as a conductor in the field of historical performance practice.

At the end of 2014 he conducted the “Orfeo” by Chr. W. Gluck at the festival of the Westdeutscher Rundfunk in Herne, the “days of old music” in an acclaimed performance. The audience and the press responded equally enthusiastically to two aria evenings conducted by Rüdiger Lotter with the soprano Valer Sabadus at the Düsseldorf Opera House and the Prinzregententheater Munich.

His interpretation of the Brandenburg Concerts, which he presented with his orchestra, the Hofkapelle München for Sony Music 2013, were showered with praise by the trade press. The magazine “Fonoforum” said: “Lotter’s interpretations of these classics breathe the spirit of our time and can be easily measured by the lighthouse productions of past years. […] One does not really know what to highlight as the musical highlight of this production. ”

From 2011 to 2014, Rüdiger Lotter was artistically responsible for the baroque productions with the orchestra of the Ludwigsburg Castle Festival. Since 2013, Rüdiger Lotter has also regularly been invited by the festival “Styriarte” in Graz to work with the local orchestra. As part of the “Klassik heute” series, Rüdiger Lotter conducted the Symphony Orchestra of the Westdeutscher Rundfunk in 2010. In 2009, the well-known stage designer and director Anna Viebrock brought him to the Schauspielhaus Basel for a production as musical director. In the same year he was invited by John Neumaier to the Staatsoper Hamburg to participate as a soloist in the premiere of the ballet creation “Orpheus”. As artistic director of the Hasse-Gesellschaft München, he is also intensively involved in the rediscovery of the work of Johann Adolph Hasse. In 2011, Hasse’s opera “Didone Abbandonata” was re-performed in Munich’s Prinzregententheater on his initiative.

As a soloist or with his chamber ensemble Lyriarte, he performs regularly at all important festivals in the German-speaking countries. His solo CDs released by Oehms-Classics were also received enthusiastically by the international trade press. His current recording of the solo Sonatas of Johann Sebastian Bach honored the West German Broadcasting as currently the most interesting interpretation on the market. And “The early music review” judges: “His Bach is among the best I have ever heard; I have put it to the test, hoping that it is striking.

For his CD “Biber-Berio”, for which he was able to win Irvine Arditti as a chamber music partner, Rüdiger Lotter received a lot of media attention, not least because of the innovative program concept. He has received several awards, including the prestigious “Premio Bonporti” competition in Rovereto (Italy) and the international Heinrich Schmelzer competition in Melk (Austria). In 2007, Rüdiger Lotter was guest professor at the University of Music Trossingen.